Fresh out of the press: 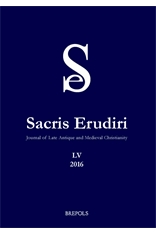 Abstract: The emergence of the Monarchianic episcopal model in Rome is tied to bishop Victor I of Rome (189?-199?). His authoritative intervention in the Easter controversy but also the frequent exclusion of heterodox teachers from the church he presided over are commonly considered as the beginning of a new era in ecclesiastical government. Based on six case studies concerning the disciplinary actions traditionally attributed to him (Florinus, Theodotus, the Easter controversy, Praxeas and the New Prophets, Calixtus), this essay examines the circumstances, context and procedures to outline the role of Victor in each of the conflicts. It argues that while the executive power was already clearly attributed to the bishop, the decision making process was still collectively legitimised. Furthermore, two major tendencies are characteristic for his episcopacy. First, like his predecessors, he maintained the traditional
virtue of “tolerance” towards heterodox teachers and teachings. Second, his efforts in the Easter controversy illustrate his desire for the (visible) unity of (some of ) the Christian denominations in the City. The essay concludes with the necessity to establish a precise and distinctive terminology, adequate for the complexity of the developments.

Due to the policy of Brepols Publishers, it is not permitted to share this paper in public repositories. If you wish to recieve a copy of the article, please send me a message.