Bishop Calixtus I. of Rome (217?-222?) and his reception in the Refutatio omnium haeresium, an anonymous heresiography from the 3rd century, was the subject of my doctoral thesis. For this presentation at the 6th Hagiotheca conference, I shifted the focus from the actual life of Calixtus to his “afterlife”, memory and the development of his cultic veneration in Rome but also its the diffusion in Europe. The presentation was held at the 6th International Hagiotheca Conference, in the session “Patrons of Rome”, 05 October 2017, at the Accademia d’Ungheria, Palazzo Falconieri, Via Giulia 1, Roma. 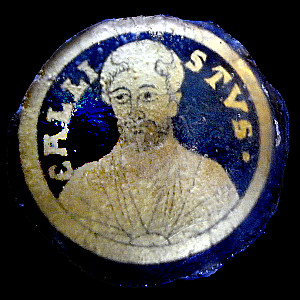 Bishop Calixtus I. of Rome (217?-222?) had everything but a boring life. As it appears, his afterlife shares the same fate.
The development of his cult and that of the diffusion can be divided into at least four distinctive stages. The first phase begins with the “rediscovery” by Bishop Julius I. (337-352). He promoted his ancestor in several ways. First, he extended his tomb at Via Aurelia with a small subterranean sanctuary, second, erected a memorial church and the predecessor basilica of Santa Maria in Trastevere and dedicated both to him, and, finally, chose to be buried ad sanctos himself. The second stage is marked by the interaction between the tomb and their visitors. The sanctuary was further extended and the Acta Martirii Sancti Calixti (BHL 1523) was invented, a novel-like narration about the alleged violent dead of Calixtus from the end of the 5th century. It is a genuine story, filling the supposed biographical gaps and explaining a number of oddities concerning the resting place of the bishop. It also influenced the decoration of the sanctuary at a later stage.
The third and fourth stages are marked by (supra)regional diffusion. It began with the translation to Santa Maria in Trastevere in the 8th century and continued with a distribution to other local churches. The final phase is marked by the division of the relics and their supra-regional distribution to a larger number of churches over Fulda (838) and Cysoing (854). The purchase of fake Calixtus’ relics by Abbot Nanter from Saint-Mihiel around 1025 at Rome is symptomatic in this period.
This paper aims to reconstruct the genesis and expansion of one particular saint. It will analyse each stage concerning the underlying mechanisms, goals and influences on the veneration, and on further developments. In the interpretation, particular attention will be paid to the remains of the material culture.

One thought on “Presentation at the 6th International Hagiotheca Conference, Rome, 4-6 October 2017, Accademia d’Ungheria in Roma, Palazzo Falconieri, Via Giulia 1”