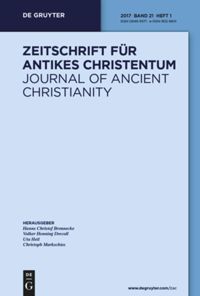 This paper goes back to a conference organised by Robert Wisniewski in 2018 in Warsaw about the role of presbyters in Late Antiquity. Hardly surprisingly, I dealt again with ‘my personal hero’ Callixtus I of Rome. Initially, I was intrigiued by the question whether Callixtus was a presbyter or, as often claimed, a deacon before he became the bishop of Rome. The deeper I digged into the material, the more the focus is shifted away towards honouring the confessors by promoting them into clerical offices.

Bishop Callixtus I of Rome (217?–222?) is well known for his position as manager of the κοιμητήριον, the earliest subterranean community burial ground, today known as the Catacombs of Callixtus. Less well documented, but particularly formative is, however, Callixtus’ early ecclesial career starting with his recognition as an authentic confessor shortly after his return from the mines of Sardinia. This contribution aims to shed some light on this formative period and explores the mechanisms behind Callixtus’ promotion to paid ecclesial ministry. It argues that Callixtus’ association with the clergy was neither an honorary, that is, automatic admission, nor merely a pious act to honour his individual and spiritual achievement. It seems, it was also a powerful instrument to financially support, integrate, and if necessary, control independent spiritual authorities. Moreover, Callixtus’ installation in active ministry, as well as that of other confessors, show typical patterns of client-patron relationship.